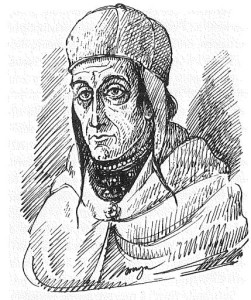 The Archbishop of Toledo, Egidio de Albornoz was the papal legate sent to Romagna by Pope Innocent VI to restore order in the rebel cities. Having gained distinction in the war against the Moors, Albornoz managed in less than three years – between 1353 and 1356 – to isolate Francesco Ordelaffi, lord of Forlì, and thus obtain his surrender in 1359. Forlimpopoli was the last bastion of Ordelaffi’s resistance against the Pope and it too fell victim to heavy retaliation inflicted by the cardinal legate. In early 1361 the town fell and was razed to the ground: the walls and cathedral were demolished with a fortress, called Salvaterra, built on the ruins of the latter. In the meantime, the bishop’s seat was transferred to Bertinoro. The punishment inflicted by Albornoz on the population was to act as an example: the town no longer existed. Only in 1379 was Forlimpopoli returned by the Pope to Sinibaldo Ordelaffi who began construction work on the new town walls and fortress.