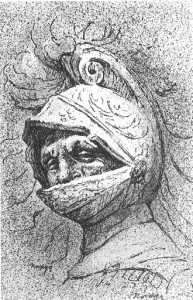 The pen and the sword: Brunoro II Zampeschi.
Brunoro II was the last descendent of the noble Guelph family of the Zampeschi whose members were lords of San Mauro, Montiano, Roncofreddo, Santarcangelo and Forlimpopoli in the 15th and 16th centuries. Born in 1540 the son of Antonello Zampeschi and Lucrezia Conti, at the age of 16 he married the daughter of a noble Roman, Battistina Savelli, who governed Forlimpopoli during her husband’s absences. As his predecessors before him, he learnt the “trade of arms” by fighting under the Pope and then the Duke of Savoy, the king of France – who appointed him Cavalier of the Order of St. Michael -, the Duke of Urbino and the Republic of Venice. As well as being a courageous fighter, he was also a man of letters and a writer, as testified by his piece “L’Innamorato” (The Enamoured Man), a short poem on the tactics to adopt to seduce one’s beloved. On his death, at the age of just 38, his wife commissioned a funeral monument in the Church of St. Rufillus, where he is portrayed dressed in armour and sitting astride a horse.