Home Forlimpopoli, a town of amphorae The eighteenth century, the century of wonder

The eighteenth century, the century of wonder

A journey to discover Baroque Forlimpopoli amid churches, palaces and monuments

Stop 1 - Church of the Servites: reconstruction and new decorative embellishments 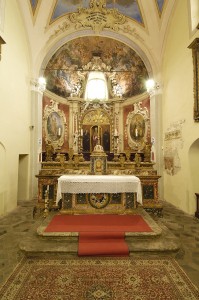 In the early eighteenth century the Fathers of the Monastery of the Servites rebuilt the church, giving it a more imposing appearance worthy of the religious order. The building thus acquired the features that still characterise it to this day; these range from the large tambour with elliptical plan to the new arrangement of the chapel and altars, through to the elegant furnishings and decorative features added to the church in the 18th century, which were in line with the aesthetic taste of the time. On entering the church, visitors can admire several eighteenth-century works of art of considerable importance.

First altar on the right: named after St. Peregrine Laziosi, it houses an ancon and altarpiece of the Miracle of St. Philip Benizi by an unknown artist. Above it are two small paintings of The Presentation of the Virgin Mary at the Temple and The Martyrdom of St. Sebastian.

Second altar on the right: this features a beautiful altar ancon, which is made from inlaid, gilded wood and houses an extremely precious wooden Crucifix. 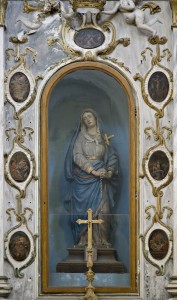 Third altar on the right: dedicated to the Grieving Madonna. The ancon, by stucco worker F. Solari of Lugano, is decorated in late-Baroque taste and completed by gold decorations by Paolo Modiani of Forlì. Inside 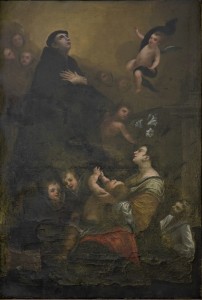 the niche is a statue of the Grieving Madonna and all around it, seven small ovals by Forlì-born artist Pietro Antonio Placucci, feature the Sorrows of the Blessed Virgin Mary.

Main altar: the decorations of the apse show the Glory of the Virgin Mary ascending into heaven amid choirs of musician angels. The apse is completed by a walnut choir built by friars Pellegrino Maiani of Forlì and Antonio Zanotti of Forlimpopoli. To the sides of the statue of St. Anthony Abbot are two paintings portraying St. Juliana Falconieri and The Blessed Gioacchino Piccolomini, both by Pietro Antonio Placucci.

Passing beyond the second altar on the left (named after the Sacred Heart of Jesus in the nineteenth century) it is possible to reach the first altar on the left, which is where the beautiful ancon that adorned the old altar to St. Martin was moved in 1735. It houses an exquisite painting, which was adapted to fit it, with scenes of The Annunciation, created in 1533 by Forlì-born artist Marco Palmezzano, a student of Melozzo degli Ambrogi.

Balcony: finely decorated with depictions of musical instruments. The organ with doors decorated in 1576 by Livio Modigliani of Forlì is housed in the choir (externally: scenes of The Annunciation; internally: Our Lady of Servites and St. Catherine of Alexandria). 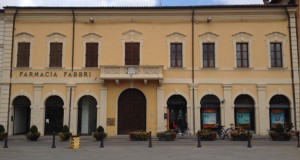 The aesthetic renewal of the eighteenth century touched both religious and private architecture. A perfect example of this is Palazzo Colombani on the north side of Piazza Garibaldi, which is now owned by the Fabbri family. Built in 1763 by the noble Colombani family of Forlì, of which the Bishop of Bertinoro, Francesco Maria, was an illustrious member, it features an elegant and broad façade. Thanks to Bishop Colombani, the building was subsequently extended towards the east, as the off-centre position of the main entrance now clearly shows. The building’s façade was adorned with a beautiful eighteenth-century wrought iron balcony in an unusual “basket” shape (which can still be seen in some late nineteenth and early twentieth-century images). It was from the same small balcony that Gioacchino Murat and the Barnabite father Ugo Bassi, leading the Napoleonic army in retreat from Romagna, looked out on 30 March 1815 to fire up the local population. In 1911 the small balcony was removed to be relocated on the façade of Palazzo Paulucci di Calboli–dall’Aste in Forlì and was replaced by a “modern” cement one.

A little outside Romana (or Cesenate) Gate, on the Via Emilia is the sanctuary and annexed convent of Our Lady of the People (or Madonna di Fuori) built in the 16th century. At the start of the eighteenth century, the Congregation of the Blessed Virgin of the People, who were responsible for looking after the sanctuary, began important restoration work on the temple, including refurbishment of the entire façade, construction of the vault covering the nave and creation of a new choir. Mid-century, the Bolognese artist Giuseppe Marchetti, who studied in the workshop of Felice Torelli, was commissioned to create six altarpieces to adorn the side altars and twelve smaller paintings with figures of Franciscan saints to be put in the niches and replace the sixteenth-century frescoes (in part still preserved to this day). 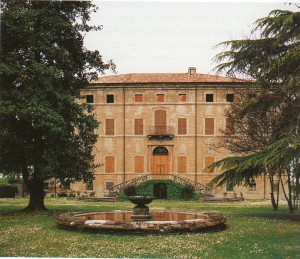 A short distance from the old parish church of Selbagnone is the beautiful villa that belonged to the marquises Paulucci Merlini of Forlì. Constructed in the mid-eighteenth century, the building appears externally severe and imposing. The beautiful façade overlookin 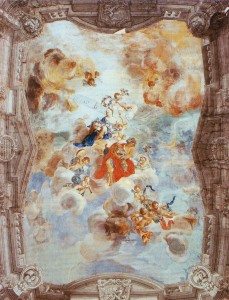 g the park is adorned with a staircase that links the garden to the main floor.

This is where visitors will find the exquisite three-storey “communicating” hall with large ceiling decorated by artist Giuseppe Marchetti, with the assistance of quadrature painter Vincenzo Del Buono. The work is one of the most sophisticated, elegant and evocative decorative pieces still to be found in the many country houses (known as “ville di delizie”) dotted around the hilly landscape of Forlì and Cesena. It shows The Allegory of Spring and Summer and evokes the delightfulness and serenity of the place and the passing of the seasons.