Palazzo della Torre, bearing witness to the passing of time 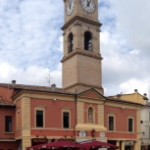 Palazzo della Torre (or dell’Orologio) overlooks the main square of Forlimpopoli. Originally the residence of the ‘Podestà’ (the chief magistrate) of Forlimpopoli, before Albornoz’s destruction of the town, the building stood opposite the early cathedral and Bishop’s palace. Rebuilt from 1380 onwards, during the rule of Sinibaldo Ordelaffi, it became the seat of the town hall of Forlimpopoli and retained this function until 1801 when, after the arrival of the French, this was transferred to the fortress. Over the centuries it has undergone far-ranging redevelopment and has been extended considerably. Between 1825 and 1834 in particular, based on a plan by local architect Raffaele Briganti, the entire façade was rebuilt and the clock tower erected. Following the Unification of Italy it was decided that the building would house a nursery school, which remained there until 1919. In 1928 it became the seat of the local “Casa del Fascio” (House of Fascist Party), but after the war the Municipality of Forlimpopoli managed to regain possession of the building and owns it to the present day. In 1975, the clock’s old manual wind-up mechanism was replaced by a new electrical one.