Home Forlimpopoli, a town of amphorae Memories of the Risorgimento

Memories of the Risorgimento

The itinerary begins at the fortress of Forlimpopoli where it is possible to admire three commemorative stones set between the arches that overlook Piazza Garibaldi. Looking along the fortress façade, from right to left, are the inscriptions dedicated to three leading exponents of the Republican movement: Antonio Fratti, Aurelio Saffi and Giovanni Bovio.

Antonio Fratti (1845 – 1897). Born in Forlì, Antonio Fratti was both a brilliant politician and a proud combatant. Aged just 21 he volunteered to fight in the 3rd War of Independence, then the failed attempt to free Rome in 1867 and the Franco-Prussian War in 1870. After returning to his homeland he dedicated himself to political activity, quickly becoming one of the most influential and brilliant leaders of the Italian Republican Party. When the Greek-Turkish War broke out, Fratti sailed to Greece where he died, struck by a bullet to the heart during a bloody military battle in Domokos. 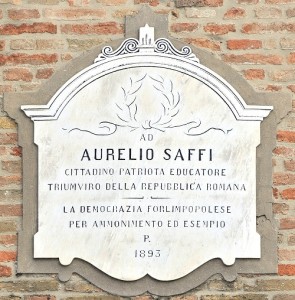 Aurelio Saffi (1819 – 1890). The stone commemorates Forlì’s Aurelio Saffi, a follower of Mazzini in Romagna. One of three leaders of the Roman Republic, after its fall Saffi was forced to seek exile, initially in Switzerland and then in England, from where he continued to actively work for Italian independence. In London he met and married his wife Georgiana, a beautiful, well-educated young woman who shared his ideals and became his loyal companion for life. After returning to Italy, in 1860 he settled in a beautiful villa in San Varano near Forlì, where he dedicated himself to organising the republican movement and worked to favour local independence and labour and trade associations.

Giovanni Bovio (1837 – 1903)
The stone celebrates the intellectual and moral qualities and extraordinary political vision of Giovanni Bovio, one of the promoters of the constitution of the Italian Republic Party, a respected exponent of Freemasonry and an acclaimed theorist of republican democracy. Born in Trani, Bovio expressed his anti-clerical beliefs from an early age, attracting a degree of hostility from clerical circles and excommunication by the Bishop. A Philosophy of Law professor at Naples University and a republican member of parliament, he also adhered to initiatives aimed at redeeming Trento and Trieste and was also a committee member of the “Pro Italia Irredenta” association. 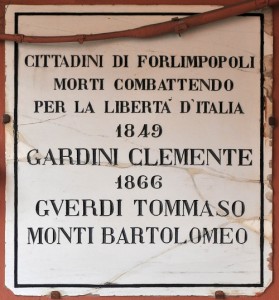 Commemorative Stone to the Fallen. Under the portico of Palazzo della Torre, near the entrance to Bar Caffetteria Italia, two commemorative stones celebrate local patriots who fell for national unity. The plaque below commemorates Carlo Gherardi who died, aged just 18, on the Volturno River near Gaeta during the 1860 campaign to free southern Italy. Above it, another inscription recalls three of the many Garibaldi volunteers who fell in the field of battle: Clemente Gardini, who died in 1849 aged 14 fighting in defence of the Roman Republic and Tommaso Guerdi and Bartolomeo Monti who fell in 1866 during the campaign to attempt to liberate the Veneto region and Venice.

Giuseppe Garibaldi (1807-1882)
A commemorative stone celebrates the Hero of the Two Worlds who travelled through Forlimpopoli in 1848 and in the years immediately preceding the Unification of Italy. He crossed Romagna in 1849, leading an army of 4,000 men north to bring help to the Venetian Republic that was under siege by the Austrians. On 1 August he was in Cesenatico from where he set sail for Venice. Intercepted at sea by an Austrian brigantine he was forced to return ashore at Magliavacca (now Porto Garibaldi). His wife Anita, who was with him, was extremely ill and died while marching through the estate of Marquis Guíccioli in Mandriole di Ravenna. Garibaldi continued his flight as far as Modigliana and from there, crossing the Apennines and Tuscany, reached the sea at La Spezia and safety.

Giuseppe Garibaldi  (1807-1882) e Giuseppe Mazzini (1805 – 1872)
Continuing the itinerary along Via Saffi, on the right (on the façade of the building opposite KM7 ice-cream parlour) is a plaque commemorating Giuseppe Garibaldi and Giuseppe Mazzini, heroes of the Risorgimento and the Unification of Italy. Unveiled by the Municipality of Forlimpopoli to mark the eightieth anniversary of the birth of Mazzini, three years after the death of Garibaldi, the plaque recalls the two “fathers of the homeland” to which Romagna is linked by a real and sincere sentiment of devotion. The people of Italy recognise that Garibaldi fought valiantly for freedom and democracy and Mazzini is considered the father of Italian republicanism and the prophet of redemption and national unity. 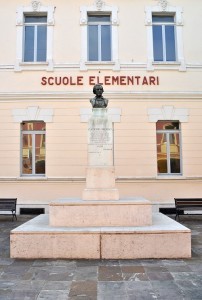 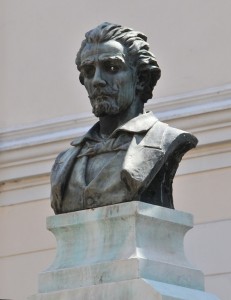 Guglielmo Oberdan (1858 – 1882)
Continuing along Via Saffi, at the centre of the square in front of the primary school is a bust celebrating the gesture of supreme sacrifice made by the young Irredentist martyr Guglielmo Oberdan. Born in Trieste in 1858 when the city was under the Austro-Hungarian rule, he changed his name from Wilhelm Oberdank to the Italianized version Guglielmo Oberdan. Refusing to serve his oppressors, he deserted the Austrian army and following the founding of the Triple Alliance, dedicated his life to political struggle. He plotted an assassination attempt on Emperor Franz Joseph, but was betrayed by an Istrian traitor and failed to put his plan into action. However, he was caught carrying two bombs so was arrested, tried by an Austrian military tribunal and aged just 24, he was hanged in Trieste, his body mutilated and decapitated. The death of Oberdan was seen as a torch accompanying and supporting Irredentist Italians and left future generations a touching message of great honesty and courage. Created by Cesena-born sculptor Tullo Golfarelli and unveiled in 1922, the base of the monument bears a solemn epigraph in Italian that translates roughly as: “Oh, Guglielmo Oberdan/who with your saintly martyrdom/annihilated the tyrants from abroad/and carried out the unity of the fatherland/now disperse the cowards from within/and raise to freedom and work/the Italy of the people/the Italy of your dreams and of your master/Mazzini/The Republicans”. Photo: Catalogue of Cultural Heritage – IBC Emilia–Romagna Region