An itinerary to discover sixteenth-century Forlimpopoli

Stop 1 - The Fortress: from military bulwark to “noble” residence 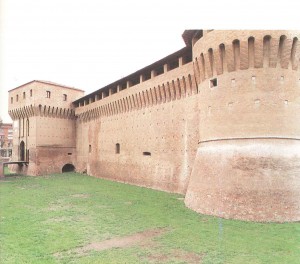 With the seignory of the Zampeschi family, the fortress finally lost its military function and became the seat of a princely court. It was thanks to Brunoro II in particular that the complex achieved its greatest splendour. A valiant fighter and man of letters, Brunoro stocked his personal library with Latin and Greek classics, philosophy and poetry books and essays on the art of war. In 1565, Brunoro printed his work entitled “L’Innamorato”, a short poem set in Forlimpopoli fortress in which the talents of the ideal enamoured man are exalted along with the tactics to adopt in order to seduce one’s beloved. Traces of that period remain in the main floor’s elegant “umbrella” vaults, which are adorned with earthenware tile corbels with ornamental plant and anthropomorphic motifs typical of that period. 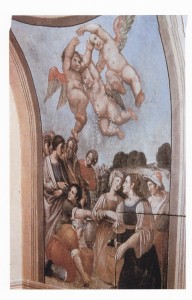 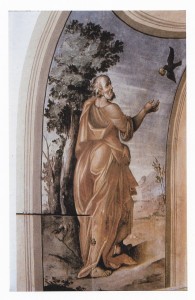 The frescoes of the Palatine chapel. Also on the main floor of the Fortress, inside the current Town Council room, there is a small noble chapel named after the Eucharist and dating from the 17th century. The ornamental embellishments on the walls clearly allude to the Holy Sacrament and portrayed at the centre of the vault is the Bread of Angels, with Manna falling from heaven on the right wall and the prophet Elijah on the left wall. (Photo of the fortress and Palatine chapel frescoes: G. Liverani).

Stop 2 - Church of the Servites

In 1533, following construction work on the new church, the friars of the Order of the Servants of Mary commissioned Forlì-born artist Marco Palmezzano to create an altarpiece of The Annunciation (photo by G. Fabbri). The scene reproduced here was very “dear” to the artist who had already painted the same theme in two previous pieces, including the “large” Annunciation now housed in the Municipal Art Gallery in Forlì. During the 16th century the church was fitted with a new organ whose doors were decorated in 1576 by Forlì-born artist Livio Modigliani. 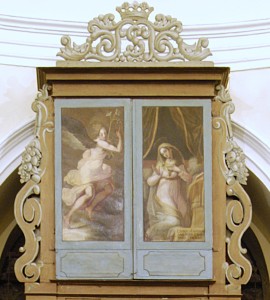 The paintings show Our Lady of the Servites and St. Catherine of Alexandria on the small internal doors, whilst on the external ones are a scene of The Annunciation with the Announcing Angel and Our Lady being Announced to. Also dating from the 16th century are the two large paintings in the presbytery, either side of the main altar, which portray The Slaughter of the Innocents on the right and The Miracle of Mount Amiata on the left, a clear reference to the cult of St. Philip Benizi, a leading exponent of the Order of the Servants of Mary.

Stop 3 - The Basilica of St Rufillus 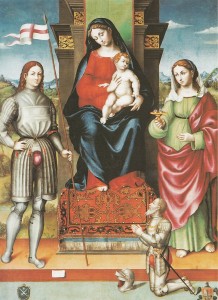 During his seignory, the great philanthropist prince Antonello Zampeschi gifted the city with many prestigious works of art. The most important examples of these are in the abbey church of St. Rufillus for which he commissioned artist Luca Longhi of Ravenna to create two altarpieces of Our Lady Enthroned with Child and Saints Valerian and Lucy and his father Brunoro I (dated 1528) and Our Lady Enthroned with Child, Saints Rufillus and Anthony Abbot and the buyer (dated 1530). He also commissioned Forlì-born artist Francesco Menzocchi, who had studied under Marco Palmezzano, to create an oil painting of the Deposition of the Cross that shows the figure of Christ in the arms of the grieving Virgin Mary and Mary Magdalen. Moreover Antonello commissioned the sepulchral monument to Brunoro I, which is attributed to the sculptor Jacopo Bianchi of Dulcigno. Alongside this is the funeral monument to Brunoro II, commissioned by his wife Battistina Savelli, which was created by sculptor Andrea Formaino of Ravenna and added in 1591.