Home Forlimpopoli, a town of amphorae The New Factories of the Nineteenth Century

The New Factories of the Nineteenth Century

An itinerary to the monuments, palaces and roads redesigned in the nineteenth century

For this itinerary contact the Tourist Information Office as some of the sites on it require entrance tickets and/or pre-booking. 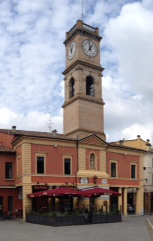 The most significant transformation implemented during the nineteenth century centred on the “new” square, now named after Giuseppe Garibaldi. During this century, the four arches that link the square with the interior of the complex were opened up on the western façade of the Fortress. On the opposite side of the square, the old town hall, now known as Palazzo della Torre, was given its current architectural lines including the tall clock tower. At the base of the tower, a niche was created to host a beautiful statue of The Immaculate Virgin Mary. The manually-wound, nineteenth-century clock continued to function until 1975, when the old mechanism was replaced by a new electric one.

Also during the same century, a new building was constructed on the south side of the square to accommodate the municipal doctor, surgeon and vet. Known as the “new factory”, it was constructed based on plans by local architect Rufillo Righini. Today the building is owned by the “Cassa dei Risparmi di Forlì” bank and houses its local branch offices. A three-storey building, which features a neoclassical loggia on its main façade, was constructed during the same century adjacent to the fortress’s south-western tower. Although it was initially privately owned, it was later bequeathed to the Congregation of Charity, but was destroyed by the Germans in 1944 and never rebuilt. 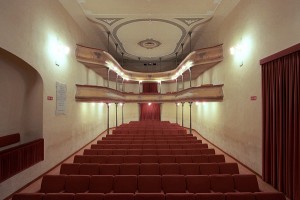 The small municipal theatre is still one of the finest examples of venues built for the performing arts in Romagna in the 19th century. Inaugurated in 1830, it occupies what was once the fortress’s “grand hall” and was initially named in honour of Carlo Goldoni. As early as 1878 the theatre was refurbished and extended based on a design by Bertinoro-born architect Giacomo Fabbri (1843–1905), with the aim of adapting it to modern theatre performances. The original structure with boxes was also replaced by two orders of balconies supported by slender cast iron columns. Although now only partially visible, decoration of the theatre was entrusted to local artist Paolo Bacchetti (1848–1886). In the early part of the 20th century the building was adapted to screen film. Completed in 1982, major restoration work reinstated the small theatre’s original decorations. Today it has a dual role as both a theatre and a cinema and is the “beating heart” of the community, hosting numerous activities and events organised by the extensive network of local associations. Inside the theatre, a commemorative stone recalls the infamous raid by a gang of bandits, known as the “Banda del Passatore”, on the night of 25 January 1851. 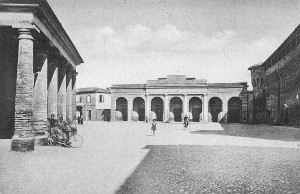 Loggia della Beccheria, designed by local architect Giuseppe Tellarini, is a characteristic building with portico constructed in 1865 to house activities for butchering and selling meat. The Loggia was called “della beccheria”, a term normally used to describe a place dedicated to the butchering and sale of “beaked” animals, although it was later used to include all premises dedicated to the sale of meat in general.

The building is located on the east side of Piazza Pompilio, which was obtained when the northern moat was filled in during the second half of the 18th century and was designed to house the commercial activities of Artusi’s home town. In the 1820s and 30s, several narrow passageways were opened on the external wall of the fortress overlooking the square and the internal premises allocated for use as shops. In fact, four commercial activities were opened there, three of them butcher’s. In 1861, a large ice-house was built in one of the fortress rooms adjacent to these commercial activities to help them preserve the butchered meats. Now part of the Archaeological Museum of Forlimpopoli, the ice-house continued to function until the 1960s.

Loggia della Misura. Close to Loggia della Beccheria stands Loggia della Misura, also known as Foro Annonario, built by the town’s municipal administration in 1817. As well as playing a key role in developing commerce, the loggia was immediately seen as a delightful architectural feature that added to and improved the surrounding urban context. The loggia still features sombre and elegant Tuscan order columns, noticeable on the north side of Piazza Pompilio. Inside the Loggia della Misura are two commemorative stones; one dedicated to pularul (poultry men) and the other to baruzér (carters), recalling the trades (along with brokers and horse dealers) favoured until quite recently by locals.

Stop 4 - The Carmelite Church: the new church and decorations by Bacchetti

The Carmelite Church is one of the nineteenth-century religious buildings to have undergone the most extensive transformation and renovation work. Built in 1626 and originally entrusted to a community of Carmelite monks, the church was then assigned to two rectors and finally to the parish of St. Rufillus that continues to officiate it. In the nineteenth century the presbytery walls and vault were decorated by local artist Paolo Bacchetti with works including figures of Angels and Saints, Faith and Hope, a scene of The Assumption of the Virgin Mary with Saints Simon Stock and Teresa of Avila and tondos of The Four Evangelists.

The main altar is also exquisite and has a beautiful, late seventeenth-century painted and gilded inlaid wood ancon housing a painting of chubby angels created in 1729 by local artist Filippo Magri. The painting frames a niche with a delightful statue of Our Lady of Mount Carmel. Also noteworthy is the Immaculate Conception over the side altar, on the left on entering, attributed to Francesco Longhi of Ravenna (early 17th century).

An equally significant intervention concerns the abbey named after proto-bishop Rufillus. The central nave was raised 2 metres and edged with new columns that replaced the ancient pillars built to support the roof. At the same time, the presbytery area was modified and the triumphal arch, which dated from the original building, was demolished.

An eight-column pronaos was built on the church façade that houses the two sarcophagi of the Zampeschi family that contain the remains of Brunoro I and Brunoro II. Initially located in the presbytery, the sepulchres are attributed to sculptors Jacopo Bianchi of Dulcigno (circa 1530–1534) and Andrea di Formaino of Ravenna (1591), respectively. They are exquisite examples of Renaissance sculpture in Forlimpopoli. Also inside the Church of St. Rufillus it is possible to admire works by local artist Paolo Bacchetti, who between 1881 and 1886 was called to decorate the small chapel named after the Holy Sacrament and the vault of the central nave with a representation of The Four Doctors of the Church. 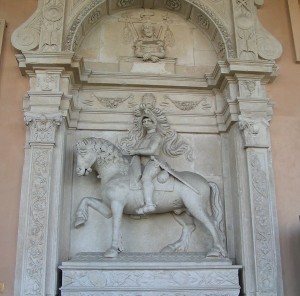 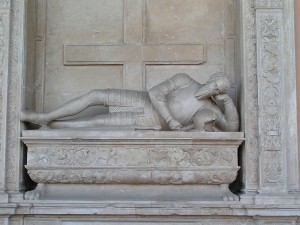