Home Forlimpopoli, a town of amphorae In the Footsteps of Artusi

In the Footsteps of Artusi

Itinerary to discover Pellegrino Artusi, the illustrious gastronome who thanks to his manual unified Italy at the table for the first time ever

For this itinerary contact the Tourist Information Office as some of the sites on it require entrance tickets and/or pre-booking. 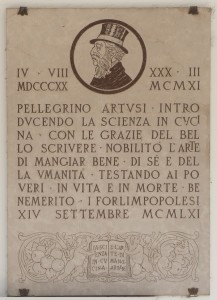 Pellegrino Artusi’s family lived in a house on the main square overlooking the fortress, the town’s main monument. It had a small portico, with two arches at the base and above it an elegantly soaring body that is not aligned to adjacent buildings. Nearby was the family shop which, as Artusi wrote, was a sort of “mishmash” that sold “a little bit of everything” including balls of cotton thread, chocolate, glue, wax, olive oil, sugar, coffee, pepper, nutmeg and cinnamon, as well as mineral powders, nails, glass and lead. Unfortunately, the home where Pellegrino was born on 4 August 1820, the only son of the thirteen children of Agostino Artusi and Teresa Giunchi, no longer exists. In 1961, when the local Pro Loco organisation celebrated the 50th anniversary of the death of the great gastronome, it was demolished and replaced by a drab building housing shops, offices and apartments. All that remains to preserve his memory is a commemorative plaque: 4-8–1820 30–3–1911 PELLEGRINO ARTUSI, BY INTRODUCING SCIENCE IN THE KITCHEN WITH THE GRACE OF GREAT WRITING, HE ENNOBLED THE ART OF EATING WELL FOR HIMSELF AND FOR ALL HUMANITY, BEQUEATHING MERITORIOUS TO THE POOR IN LIFE AND DEATH, THE PEOPLE OF FORLIMPOPOLI 14 SEPTEMBER 1961. 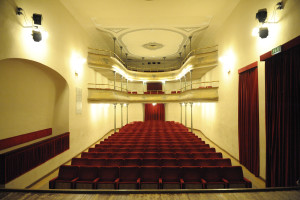 On the night of 25 January 1851, the small theatre in Forlimpopoli was the site of one of the most infamous raids by the gang headed by the outlaw known as “Il Passatore”, Stefano Pelloni. During the interval of a theatre performance, about 15 bandits stormed the stage and, when the curtains were drawn, stood before the town’s main figures and upper classes sitting in the stalls brandishing arms. Called forward one by one, they were stripped of all they had and if the bounty was deemed insufficient, were accompanied home to collect all their precious assets. One of the families robbed on that stormy night was the family of Pellegrino Artusi. His sister had been so terrified she had sought shelter on the roof, but she was found and brutally raped. 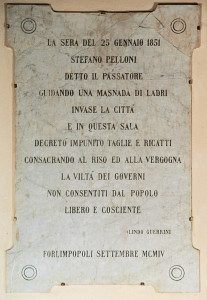 Inside the theatre, a commemorative plaque by Olindo Guerrini recalls that tragic event, which resulted in the decision by the Artusi family to sell their home and shop in Forlimpopoli and move to Florence. The theatre in which Pelloni committed this sadly notorious crime had been inaugurated in 1830 and was housed in the former main hall of the fortress, close to the municipal seat. It was used to host the activities of the local “Academy of the Burning Ones”, as well as annual music and prose seasons. Based on a plan by architect Giacomo Fabbri of Bertinoro, the theatre was extended and “modernized” from 1878 onwards and when it reopened in 1882 presented itself with a U-shaped structure boasting two orders of galleries supported by slender cast iron columns. Named after Giuseppe Verdi, the small theatre in Forlimpopoli underwent refurbishment and in 1982, a hundred years after its inauguration, was returned to the community in all its nineteenth-century glory. 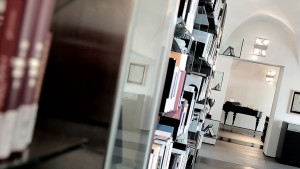 To all intents and purposes this is the beating heart of Artusi’s home town. The result of complex and sophisticated restoration work, Casa Artusi opened in 2007 in the ancient monastery of the Servants of Mary, whose origins date back to the golden age of the late Renaissance. Built in the second half of the 15th century on the site on which the hospital and oratory of the Brotherhood of the Black Flagellants had stood since the Middle Ages, the monastery complex was given its current form during the 18th century. More specifically, in 1707, the church central plan was adopted and an imposing elliptical tambour was added. Inside it houses a wealth of stuccoes and works of art, including a precious Annunciation by Marco Palmezzano (1533) and an organ with doors decorated by Livio Modigliani (1576). Casa Artusi now occupies the entire monumental complex, a total area of approximately 3,000 m², and has many rooms with different functions all relating to different expressions of gastronomic culture. It is, at the same time, a cookery school, a restaurant, an inn, a wine cellar, a museum, a library and an events venue. Basically, it is the living expression of home cooking based on the teachings of Pellegrino Artusi and his book “Science in the Kitchen and the Art of Eating Well”.

In particular, the gastronomic library on the ground floor houses precious furniture from his Florentine home, such as his study and lounge, including a splendid painting by the artist Angiolino Romagnoli of “Titian painting Venus” (1882), the only piece not sold in an auction and remained in his home town. It also houses his cherished collection of books on literature and gastronomy, his extraordinary archive with original texts from the first edition of his manual, the manuscript of his autobiography and about 2,000 letters sent to Artusi from his adoring readers, primarily women. These documents include a small sheet of faded paper; it is a telegram dated 1 April 1911 communicating the death of Artusi two days previously and the appointment of the Town of Forlimpopoli as executor of his will. Therefore, although Artusi had lived for 60 years in Florence, he hadn’t forgotten his birthplace. In turn, Forlimpopoli seeks to consolidate his ideas and work, primarily by hosting the Artusi Festival. Casa Artusi is the flagship of this project and the path to understanding great home cooking as it was taught by the master whose name it proudly bears.