Forlimpopoli between the Fourteenth and Fifteenth Centuries

A journey retracing the signs of mediaeval Forlimpopoli to discover the ruins that survived Albornoz’s destruction. For this itinerary contact the Tourist Information Office as some of the sites on it require entrance tickets and/or pre-booking.

Stop 1 - Archaeological Museum of Forlimpopoli (MAF) and remains of the Cathedral of St. Maria Popiliense 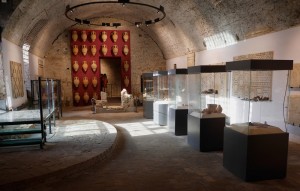 The itinerary begins in the rooms of the Archaeological Museum of Forlimpopoli (MAF). Open to the public again after recent refurbishment and reorganisation of the entire layout, the museum has important artefacts linked to the history of the town and in particular the foundation of Forum Popili in the 2nd century BC. The museum is located in the charming ground floor rooms of the fortress, on the very site where once stood the ancient cathedral named after St. Maria Popiliense. Built in the 11th century, the church was razed to the ground in 1361 during the destruction of the town ordered by Cardinal Egidio d‘Albornoz, who had been sent to Romagna to re-establish sovereignty of the state of the church on rebel cities. Subsequently, it was decided that a fortress, at the time called Salvaterra, should be built on the ruins of the cathedral. 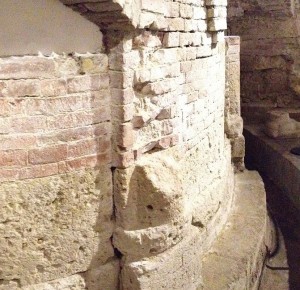 Remains of the ancient cathedral emerged during excavation and restoration work carried out in the second half of the 20th century inside the Fortress. In particular, remains of the apses and numerous architectural features and elements were recovered (columns, pillars, capitals). Thanks to these finds it was possible to reconstruct the original, basilica-style plan of the church, which was 39.6 metres long and 21.5 metres wide. The remains of the ancient temple and the artefacts that came to light during excavations are now housed in the Archaeological Museum. 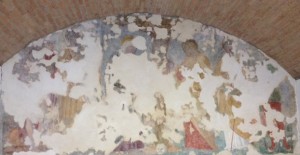 The frescoes of the first Palatine chapel. At the entrance to the Archaeological Museum it is also possible to admire the remains of the frescos that once decorated the Fortress’ Palatine chapel; a small oratory officiated for the nobility and boasting a few, very sombre religious ornaments. Recently restored, the painting shows a scene of the Crucifixion with the Virgin Mary, St. John and the Bishop Saints Rufillus and Brice of Tours. At the far sides are two figures, which are no longer recognisable as large parts of the fresco are missing. 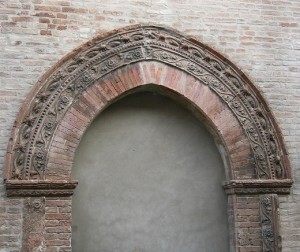 In the 14th century, a hospital with a small annexed oratory owned by the Brotherhood of Black Flagellants, also known as the Company of Good Death, once stood in the area now occupied by the complex of Casa Artusi and the Church of the Servites. In their charter, the brothers of the order committed their lives to helping the needy and arranging to give wayfarers and pilgrims who died far from home a decent burial. The hospital was active until the latter half of the 15th century when the friars of the Order of the Servants of Mary arrived and built their church and annexed monastery on the site of the hospital and small oratory. Remains of the original oratory, which had a rectangular plan and was north-south facing, include the entrance portal (now walled in) and two pilasters that edged the façade on Via Sendi. The portal features a beautiful pointed arch that is decorated with an exquisite earthenware tile frame with plant motifs. Another pilaster, visible in the north-west corner of the church along Via Cesare Battisti, marks the northern edge of the old oratory.

Stop 3 - The Church of St. Peter the Apostle: the fifteenth-century frescoes 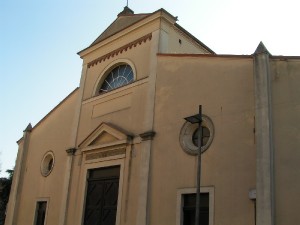 The Church of St. Peter is one of the oldest in Forlimpopoli but, over the centuries, has undergone so much restoration work that very little of its original layout remains. The elegant, small trefoil earthenware tile arches that decorate the top of the façade and the imposing brick columns topped by original capitals, subsequently incorporated in the quadrangular cross-section pillars date from the 14th-century reconstruction that took place following the destruction carried out by Albornoz. A portion of an ancient column is also visible near the first arch of the left aisle. Some fragments of frescoes on the wall above the left-hand side portal, portraying a Madonna with Child and the face of a hermit saint, date from the 15th century. Inside a pointed niche, painted dark red colour and decorated with floral motifs, the figure of the Virgin Mary is shown with her head slightly bent and gazing adoringly at the Child in her lap. Her head is covered in a transparent veil that falls onto her forehead and down her hair. All that remains of the Child are his arms and hands, which seem to be lovingly intertwined with those of his Mother. Clearly visible to the right of the group is a fresco fragment of a male figure with the head covered in a black hood, some facial features and a flowing white beard, painted with fine, circular brushstrokes; for these reasons, the figure is believed to be that of a monk or hermit saint.